This is part 2 of 3 from my Catholic Foundation speech:

To answer the question "why Catholic schools" from a global perspective I turn to our Holy Father, Pope Francis I. In his apostolic exhortation, "Evangelii Gaudium" or Joy of the Gospel, our new Pope cites the following problems facing our Church today:

2. A decline in Vocations.

3. A decline of Society in general.

We need Catholic schools because of the deterioration of the family. Pope Francis claims that the family, the fundamental cell of society, is undergoing a crisis. Families, the place where, Francis writes, "we learn to live with others", where "parents pass on the faith to their children" are in crisis. "Growing number of parents," according to Pope Francis, "do not bring their children for baptism or teach them how to pray." Marriage, in the words of our Pope, "tends to be viewed as a form of mere emotional satisfaction that can be constructed in any way or modified at will."

We all know the divorce rate in this country. Families in our world are broken, confused, hurting, lonely, and in some cases even violent or abusive. Our Catholic schools, often fondly referred to as families or homes, must be places of safety, stability, structure and love for our students. Students must truly come to see, despite the disfunction they may witness at home, a different approach to treating others because of their time spent in our Catholic schools.

The Congregation for Catholic Education wrote in its 1988 document, The Religious Dimension of Education in a Catholic School (#25): 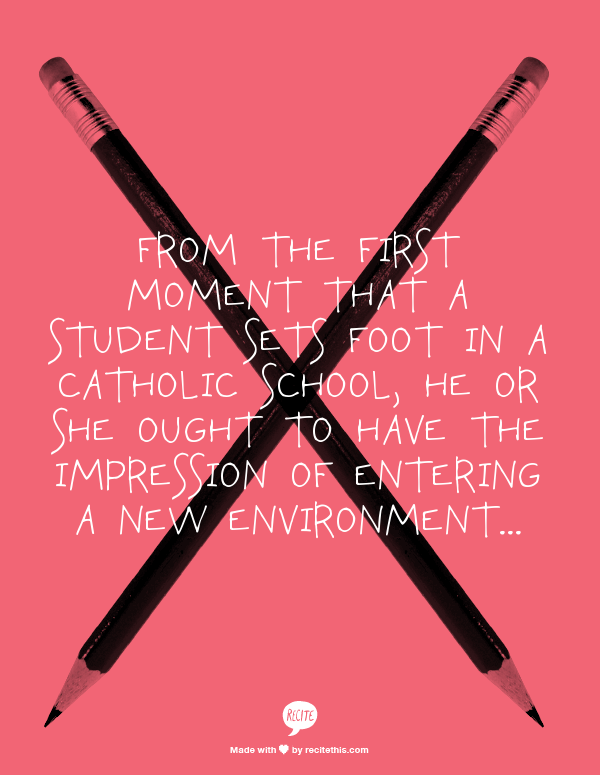 From the first moment that a student sets foot in a Catholic school, he or she ought to have the impression of entering a new environment, one illumined by the light of faith, and having its own unique characteristics...an environment permeated with the Gospel spirit of love and freedom.

If our Catholic schools can offer to students a true picture of familial love and a deeper understanding of the role of the family within the Catholic Church, if we can inspire students to enter into the Sacrament of Marriage with greater fidelity, maturity and reliance upon Jesus, if we can inspire better Catholics, we can take back the family.

Our Catholic schools must create good Catholics; in doing so, stronger families will result.

We need Catholic schools to spark a rebirth in vocations to the priesthood and religious life. Pope Francis acknowledges this decrease stating that it is often due "to a lack of contagious apostolic fervour in communities which results in a cooling of enthusiasm and attractiveness." Furthermore, Francis believes that because of this, "many people feel disillusioned and no longer identify with the Catholic tradition."

But, there is hope. Pope Francis asserts:

Wherever there is life, fervour and a desire to bring Christ to others, genuine vocations will arise...the fraternal life and fervour of the community can awaken in the young a desire to consecrate themselves completely to God and to the preaching of the Gospel.

If our Catholic schools can simultaneously catechize and evangelize, if we can bring a passion for Christ to our students and create a culture that students come to know that God's desire for them is more magnificent than their heart's greatest desire, if we can inspire better Catholics, we can inspire more vocations to the religious life.

Our Catholic schools must create good Catholics; in doing so, more vocations will result.

Third, from a global perspective, we need Catholic schools because of the problems facing society today. Our Pope cites the following "deficiencies which need to be healed by the Gospel: machismo, alcoholism, domestic violence, low Mass attendance, fatalistic or superstitious notions which lead to sorcery and the like." Francis adds to this list of difficulties: the influence of the communications media, a relativistic subjectivism, unbridled consumerism which feeds the market and a lack of pastoral care among the poor." We might want to add to the list school violence, intolerance, and political polarization.

"In response," our Pope tells us, "we need to provide an education which teaches critical thinking and encourages the development of mature moral values...The Church," he continues, "has acted as a mediator in finding solutions to problems affecting peace, social harmony, the land, the defense of life, human and civil rights, and so forth." Pope Francis even includes Catholic schools as a part of the solution, "And how much good has been done by Catholic schools and universities around the world!"

Posted by Michael Zelenka at 8:04 PM