And to Walk Humbly With Your God

"This is what Yahweh asks of you: only this, to act justly, to love tenderly and to walk humbly with your God."

I recently came across the story of Ivan Fernandez Anaya, a middle-distance runner from Spain, and his act of sportsmanship. It occurred during an international event in late 2012. The short form of the act is this:

Ivan was in 2nd place heading into the end of the race. The 1st place runner, only a short distance away from the finish line but unaware of its actual location, slowed down thinking that he had already crossed it. Ivan, aware of the whereabouts of the finish line, signaled to the 1st place runner that the race's endpoint was still ahead. The 1st place runner sped back up and won the race. Ivan could have easily blown past the runner, capturing the victory in the final moments as a result of this logistical error. When asked about why he did this, Ivan responded,

He was the rightful winner, He created a gap that I couldn't have closed if he hadn't made a mistake. As soon as I saw he was stopping, I knew I wasn't going to pass him. 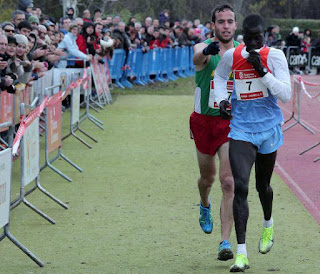 Anaya continued, "But even if they had told me that winning would have earned me a place in the Spanish team for the European championships, I wouldn’t have done it either. I also think that I have earned more of a name having done what I did than if I had won. And that is very important, because today, with the way things are in all circles, in soccer, in society, in politics, where it seems anything goes, a gesture of honesty goes down well."

It is unfortunate that more hasn't been said of the gesture. Maybe there is still hope that this act of humility can reach a broader audience. And, even though Ivan claims that he feels he has earned more of a name for himself having done this, I am sure that his desire for fame was not the motivating factor behind this act. 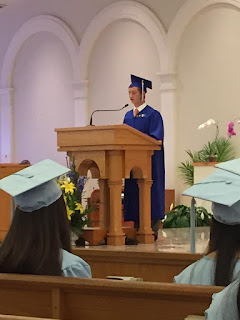 Run humbly with your God.

At our ICS graduation ceremony for the Class of 2015, another astounding act of humility occurred. Ian Stahley, in his Salutatorian speech to the rest of his class, acknowledged, congratulated and praised the Valedictorian, Max Hernandez. I was astounded. Ian is an incredible young man, and I was not surprised that he would be capable of such a strong act, but this was his moment to shine, his speech, his award. And, instead of basking in the glory, he paid authentic tribute to another.

Speak humbly with your God.

I had the great honor in early May to attend the wedding of Patrick Graff (former ICS ACE teacher) to Laura Miller at the University of Notre Dame. As most weddings are, this was a day filled with joy, happiness and blessings. The ceremony was beautiful, the reception lively. Even the weather, forecasted as a day of rain, cooperated with only a few sprinkles. It was a day filled with grace.
But, perhaps the most AMAZING moment of grace (outside of the transformative Sacrament of Marriage, of course!) took place at the reception.

Unbeknownst to his bride and all but a few of his close friends who had helped orchestrate the necessary materials, Patrick ambushed the garter moment by taking the microphone and telling Laura and the entire group assembled that he had a gift he wanted to give her. He cited her family’s Holy Thursday tradition of washing each others’ feet  as he proceeded to procure a pitcher of water and basin and invited Laura to the middle of the dance floor to sit and allow him to wash her feet. She humbly agreed and what ensued was one of the most beautiful moments between any two people I have ever witnessed or even heard of. The room fell silent. People cried. Those who didn’t sat awestruck. Grace was abundantly present.

Laura followed Patrick’s lead and washed his feet. It was an AMAZING sign of their service and submission to God and to each other. 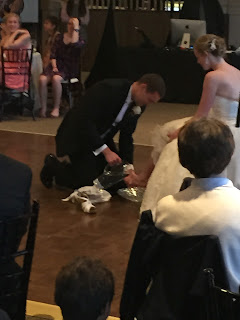 Serve humbly with our God.

Imagine how different our world could be if these events replaced the common ones – where service supplants being served, where doing the right thing is commonplace and where love reigns supreme.

Imagine a world filled with people courageous enough to kneel down – humbly, lovingly, powerfully – and serve.

May we, too, act justly, love tenderly and walk humbly - in service and with great love.