Can You Hear It? 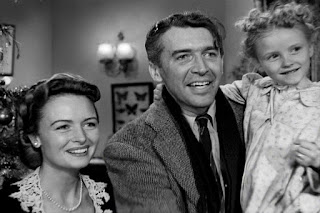 Carol of the bells.

In the movie, It's a Wonderful Life, Zuzu Bailey, the daughter of the main character famously quips upon hearing a bell, "Teacher says, 'Every time a bell rings an angel gets his wings.'" This concept is one that George and Clarence discuss earlier in the movie. The bell signals a celestial promotion.

Maybe, despite the secularization of Christmas, the symbol of the bell during this holy season really does signal a celestial promotion. But, instead of an angel earning wings, perhaps the abundance of bells during this season are meant to serve as reminders of something special, something magical, something divine.

Bells typically serve as alarms. They remind us of the passing of time and help us to keep better tabs on its swiftness. School bells. Alarm clocks. Egg timers. They all function to awaken us to something important - the end of the class period or school day, the end of sleep, the completion of a meal.


As a young child, I vividly remember sitting at mass and getting excited upon hearing the bells during the consecration. As a tactic to both focus my young mind as well as elicit a sense of mystery, my dad would tell me that the bells during mass signaled something special, something magical, something divine. It was the sound of angels reminding us that Jesus was present, my dad would say, and as such it was a moment for me to both anticipate and appreciate. It left such an impression on me and my sense of wonder about my faith that I've employed this tactic with my daughters as well.

My hope is that it will awaken them to the gift of faith.

My hope is that the bells of the season, as well as those rung during mass, may do the same for you, too.

Maybe the jingling silver bell that is caroling on a sleigh is meant to ascend our minds, hearts and lives into the divine. Maybe these bells, like those rung at mass to help my daughters recognize the presence of Jesus in the Eucharist, are supposed to awaken us to the mystery of the Incarnation - God taking on human flesh and dwelling among us - so that we don't miss the next class, the start of the day, an exquisite meal, or the Way, the Truth or the Life.

This Christmas, may the bells that you hear heighten your thoughts to our Lord Jesus Christ. May the bells of the season awaken you to a new way of life, unfailing mercy and unbounded joy.

The Christmas bell is ringing. Can you hear it?


Posted by Michael Zelenka at 9:30 PM