Unleash the Power to Conquer

ICS Class of 2018, these are my parting words to you. I'm sorry that they are just now getting to you. You've already experienced and most likely finished your first year of high school. 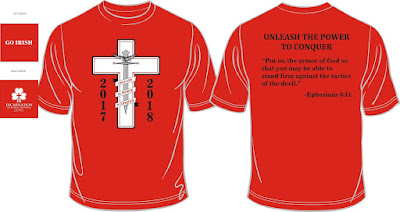 But, from what I know, none of this came to fruition.

I hope and pray that you still managed to unleash the gifts, talents, and energies given to you by God to become the people He created you to be. I hope and pray that your stamp last year on Incarnation Catholic School may have been more lasting than mine. The thing about our work is that we are meant to toil for the sake of the Kingdom, not for our own glory, fame or lasting name.

ICS is still making God known, loved and served. The Kingdom is still being advanced. Amen.

The thing about unleashing this power to conquer, though, is that the conquering does not entail an easy fight. I'm sure you've had your share of battles over the past two years. I hope that you've picked up your armor - the cross and the Bible - and that you have fought courageously, if not victoriously. I pray that despite the absence of a t-shirt, the phrase being spoken, or the opportunities to lead as we had collectively envisioned, that you still managed to unleash the power to conquer.

The Spirit - your spirit - cannot be boxed into a pep rally. It wasn't made to fit nicely into a letterhead or on a wall.

It is meant to run wild, live free, and love strong, all for the sake of our King and His Kingdom.

Unleash the power to conquer - your fears, life's battles, transitions, sin, evil, even death itself.


I've been reading my daughters the Chronicles of Narnia series by C.S. Lewis. We're on the final book, The Last Battle, but there is a scene from the previous book, The Silver Chair, that I want to share with you.

The enchantment, however, wears off for an hour each day. It is during this time that the Queen has Rilian tied to a silver chair so that he cannot escape. He is told that the opposite is true. The Queen lies to Rilian telling him that the enchantment happens during this hour and that he must be tied up because he becomes such a horrible monster that he would cause destruction unimaginable if loosed.

So, night after night, Prince Rilian suffers through an hour of knowing his true nature, his authentic self, screaming for help, straining to break the bonds holding him captive, only to fall back into his enslaved trance. Caged. Bound. Trapped. Leashed. Conquered.


"Ah," (Prince Rilian) groaned. "Enchantments, enchantments...the heavy, tangled, cold, clammy web of evil magic. Buried alive. Dragged down under the earth, down into the sooty blackness...how many years is it?...Have I lived ten years, or a thousand years, in the pit?"

He had been speaking in a low voice; now he looked up, fixed his eyes upon them, and said loud and clear: "Quick! I am sane now. Every night I am sane. If only I could get out of this enchanted chair, it would last. I should be a man again. But every night they bind me, and so every night my chance is gone. But you are not enemies. I am not your prisoner. Quick! Cut these cords."

"Once and for all," said the prisoner, "I adjure you to set me free. By all fears and all loves, by the bright skies of Overland, by the great Lion, by Aslan himself, I charge you-"

The story's protagonists, Eustace, Jill and Puddleglum, debate for a while about whether or not to believe him and set him free. He is the first person on their long and arduous journey to say Aslan's name, a sign given to them by Aslan himself that this person would be the long-lost Rilian. Despite their own fears holding them back, they take up swords and release him.


"In the name of Aslan," they said, and began methodically cutting the cords. The instant the prisoner was free, he crossed the room in a single bound, seized his own sword (which had been taken from him and laid on the table), and drew it.

"You first" he cried and fell upon the silver chair. That must have been a good sword. The silver gave way before its edge like string, and in a moment a few twisted fragments, shining on the floor, were all that was left.

"Had I forgotten (Narnia) when I was under the spell?" asked the Knight. "Well, that and all other bedevilments are now over. You may well believe that I know Narnia, for I am Rilian, Prince of Narnia, and Caspian the great King is my father."

ICS Class of 2018, in your life you will have many silver chairs. There will be countless things that will hold sway over you, challenges that will overpower you, events that will bind and trap you and attempt to turn you into someone you are not.

Unleash the power to conquer and cut each of those silver chairs to pieces. Leave but only a few twisted fragments behind, if anything.

This won't be easy; it will be hard. Incredibly hard. It will end up being the hardest thing that you've ever done. But, you can do hard things.

You are a child of God.

His royal blood courses through your veins. You were made for greatness, built for holiness and destined for sainthood. Unleash the power to become who you were created, built and destined to be.

ICS Class of 2018, no matter what life will continue to hurl at you. No matter the battle you find yourself fighting, no matter the chair that seemingly holds you captive.

Unleash the power to conquer.  It's not too late...it's better late than never.