It's Not Just a Symbol

The Eucharist is the source and summit of our Catholic faith. Yet, only one-third of Catholics believe in the Real Presence of Jesus in the Eucharist (https://www.pewresearch.org/fact-tank/2019/08/05/transubstantiation-eucharist-u-s-catholics/). 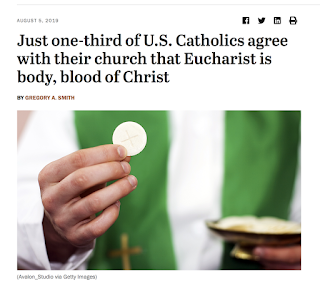 Only 50% of Catholics know Church teaching on the Eucharist. Batting .500 would be amazing in baseball and many other sports and endeavors. But, roughly the same percentage of atheists (47%) know that the Church teaches that the Eucharist is the Body and Blood of Jesus.

Almost 70% of Catholics think that the Eucharist is just a symbol, 20% of whom know the Church's teaching on it.

It is not just a symbol.

It is not a symbol of Jesus, or of the Last Supper, or of bread, or life, or the Passover, or anything.

Catholic writer Flannery O'Connor famously defended the Eucharist as more than just a symbol at a dinner party with friends. She writes:


Well, toward morning the conversation turned on the Eucharist, which I, being the Catholic, was obviously supposed to defend. Mrs. Broadwater said when she was a child and received the Host, she thought of it as the Holy Ghost, He being the "most portable" person of the Trinity; now she thought of it as a symbol and implied that it was a pretty good one. I then said, in a very shaky voice, "Well, if it's a symbol, to h*** with it." That was all the defense I was capable of but I realize now that this is all I will ever be able to say about it, outside of a story, except that it is the center of existence for me; all the rest is expendable. (https://muse.jhu.edu/article/20417/summary)

The Eucharist, instituted at the Last Supper, is the Body, Blood, Soul and Divinity of Jesus Christ. In the sixth chapter of John's Gospel, Jesus teachers His Real Presence in the Eucharist as more than symbolic. Known as the Bread of Life Discourse, Jesus's language continues to press toward the fact that He is the Bread of Life.

Notice how His language intensifies with each iteration of this teaching:


As this teaching progresses, people in the crowd murmur, quarrel and leave. In response, Jesus does not back down or soften His language to the realm of symbolism.

He leans in and declares that His flesh is true food and His blood is true drink. At two different times He leads off with the phrase, "Amen, amen". Not one, but two. Not once, but twice.

He is the Bread of Life.

The Eucharist is not a symbol.

This is really hard to believe, which is why it's a mystery of our Catholic faith.

I've recently been praying for Jesus to help my unbelief. Ever since my daughter, Elizabeth, made her first Communion earlier this year, I have been receiving Jesus under both species. My church growing up never offered the Precious Blood, so in churches where both were offered, I typically only received Jesus's Body.

And, candidly, a cup shared by an entire congregation scared me. Especially during cold and flu season.

It is Jesus's Precious and holy Blood, poured out for me and my sins. Eating His Body and drinking His Blood puts His life inside of us, "Christ is consumed, the mind is filled with grace, and a pledge of future glory is given to us" (Catechism of the Catholic Church, #1323).

This teaching is hard.

In a sense, though, it is even harder if it's just a symbol.

Why go to Mass every weekend, especially with young kids in tow, if it's only a symbol? I can read the Bible, look at a crucifix, and show up for the important days if that's the case. This is probably why there is a correlation between belief in the Real Presence of Jesus and weekly Mass attendance.

Why receive the Sacrament of Reconciliation, unless maybe I've done something really bad, if it's just a symbol? Jesus already died for my sins, and going into the dark confessional is scary.

What's the point of Baptism, Confirmation, Matrimony, Holy Orders, Anointing of the sick if they, and the Eucharist, are just symbols, if the life and grace of Jesus does not fill us and change us in these moments?

If it's just a symbol, what other teachings are symbolic? Loving your enemies? Being peacemakers? Offering forgiveness? Going out to encounter those on the margins?

What about the Resurrection...?

Until then, and especially after, act and pray like a believer.

It's not just a symbol.


*for another take on this same idea, check out this Word on Fire blog: https://www.wordonfire.org/resources/blog/jesus-may-not-need-our-adoration-but-he-asked-for-it/25556/
Posted by Michael Zelenka at 10:43 AM