The Debate, Archangels, and Mr. Rogers

Over the course of the first eight weeks of the Fall semester at the University of Notre Dame, President Fr. John Jenkins, C.S.C. has issued two apologies to the school community.

Both have centered around lapses in adhering to the strict COVID-19 restrictions in place for members of Notre Dame. In both cases, I could see myself or anyone making a similar mistake.

The first apology occurred after stopping to take a selfie with a group of students on one of the quads. All were in masks. Social distancing, though, was not maintained.

The second apology took place more recently and under the watchful eye of the nation. At the White House for the nomination of a Notre Dame faculty member to the United States Supreme Court, Fr. Jenkins attended the ceremony without a mask and without maintaining social distancing. Attendees were supposedly tested for COVID-19 and only allowed in after testing negative. The event was outdoors and wearing a mask was not mandated. Regardless, Fr. Jenkins felt compelled to send a note of apology to the Notre Dame community and take appropriate precautions after having been potentially exposed to the virus.

I find these admissions of falling short of the expectations in place for the University to be powerful examples of leading with humility.

I also find that a bit of humility from people in positions of leadership - and from all of us - could go a long way right now.

Last night's Presidential Debate was appalling in many ways. One of the many things I find shocking about the fallout from those 90 minutes is how much flack moderator Chris Wallace has taken for the way that the debate spiraled out of control. Was it his fault that humility and grace were in short measure? Was it his fault that the two people poised to be the President of the United States of America interrupted each other incessantly? What other tactics did he have at his disposal outside of the many that he tried? In Mr. Wallace's defense, I do not believe there is another person alive that could have made the atmosphere even remotely civil.

What we need right now as a country is more heart and less attack. What we need is a large dose of humility.

As I reflected on this idea, it was not lost on me that yesterday was the Feast of the Archangels, Sts. Michael, Gabriel and Raphael. These archangels are famous for defending, announcing, and healing, respectively. Their humility, in comparison to a fallen angel who's pride resulted in a rebellion against God, is worth imitating.

Humility is a key ingredient in performing all three of these arch-angelic tasks.

To defend, we must use our power not for ourselves, but for others.

To announce, we must be willing to use our voice to proclaim the goodness of God and recognize that all good things come from Him - not us.

To heal, we must acknowledge the hurt we have caused, and work toward making reparations.

To round out this incredibly random post, in lieu of finishing the debate last night and instead putting it off until this morning to finish, my wife and I watched the documentary of Mr. Fred Rogers, "Won't You Be My Neighbor?" (2018). What an incredibly shocking contrast that Mr. Rogers was and still is, even posthumously, to the debacle debate last night.

I was transported back to my 4-year old self as I watched clips of his shows and found myself mesmerized by his grace, his compassion, his intentionality, his humility, and his immense - albeit quiet and reserved - strength. To watch Mr. Rogers deliver testimony at a Senate hearing about funding public television was inspiring. To be reminded of the way that Mr. Rogers tackled issues of racism, death, loss, assassination, and tragedy was galvanizing. To hear the words that he uttered in a PSA after 9/11, "We all are called to be tikkun olam, repairers of creation. Thank you for whatever you do, wherever you are, to bring joy and light and hope and faith and pardon and love to your neighbor and to yourself" left me hoping and praying for our country and world. 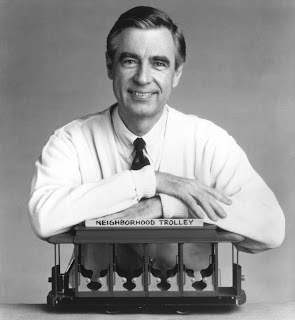 Admit when you've done something wrong and hurt others.

Announce that truth and goodness in others.

Heal: repair the part of creation given to us to tend.

And, if it helps, think of these words from Mr. Rogers (or listen to it here: https://misterrogers.org/videos/what-to-you-do-with-the-mad-that-you-feel/), the next time you're mad:

What do you do with the mad that you feel, when you feel so mad you could bite?
When the whole wide world seems oh, so wrong...And nothing you do seems very right?

What do you do? Do you punch a bag? Do you pound some clay or some dough?

Do you round up friends for a game of tag? Or see how fast you go?

It's great to be able to stop when you've planned a thing that's wrong,
And be able to do something else instead and think this song:

There's something deep inside of all of us that can help us all become what we can.

May we have the humility to recognize it in ourselves and our neighbors.

Posted by Michael Zelenka at 8:26 PM