Today, as part of Incarnation Catholic School's preparation for Easter, students in grades 4 and 5 received the Sacrament of Reconciliation. As such, they used the Church, which meant that the rest of the school would not be able to gather there to participate in another Lenten practice: the Stations of the Cross. 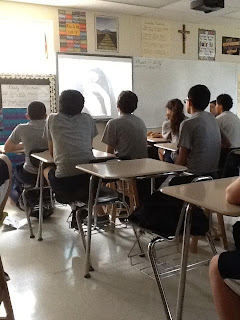 Instead of just scrapping it, though, the school decided to pray the 14 stations on the classroom level. In other words, instead of the entire school praying the Stations of the Cross, each Homeroom (with the exception of 4th and 5th grade) participated in this exercise as a small group. They did it in their classrooms. They took turns leading the prayers and reading about the stations. Some went outside. Others utilized technology. All were engaged.
We experience great solidarity when we have done the stations as a whole school. We have still enabled students to lead the prayers while the rest of the students respond, genuflect, sing and pray as part of the congregation. This was the first time that classes were afforded a uniform time to participate in the Stations of the Cross on a classroom level. Prior to this afternoon, we had always gathered as an entire school. 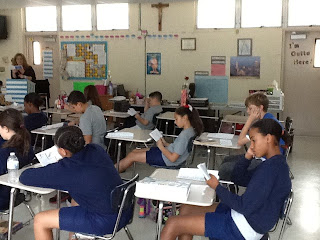 In walking around the school during this time, though, I felt that today students experienced solidarity in a different yet familiar way. Much like when we as Catholics gather in our local parishes to Celebrate the Eucharist on Sundays, students were praying the same prayers at the same time for the same purpose. In a sense, there is even greater universality in this approach than when large groups get together in one location. Not that I've ever attended a "mega-church" but I can't imagine feeling much of a sense of connection. I can't surmise that the feeling of community is anywhere near as strong as the small prayer groups that walked with Jesus this afternoon along His Via Dolorosa. 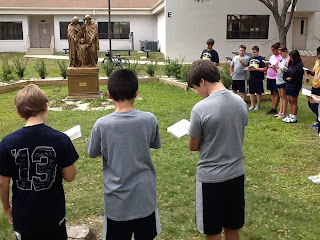 The early Church was comprised of small Churches. The Catholic Church actually still values this concept by promoting the domestic church. The propagation of the faith rests first and foremost with the parents and parents are the primary educators of their children - especially in matters of faith. 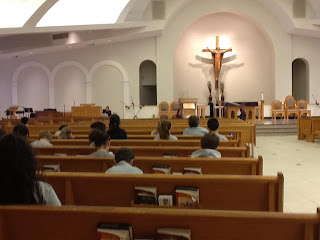 Incarnation is not a big school. Incarnation Catholic Church, by some standards, is relatively average in size, too. Today, though, students gathered and prayed and supported each other in a way that was small in number but high in engagement, spirit and displays of faith. In doing so, additionally, students participated in a very intimate way in the universality of the Church - with their brothers and sisters in the literal room next door in addition to those half way across the world.

The Church uses the terms full, conscious and active to describe the level of participation we should have during Mass. Universality is one of the marks of the Catholic Church. ICS students tapped into all of these traits and qualities today.

May we tap into it again tomorrow. And on Sunday and next Wednesday and on Easter Sunday and forever and ever.


Posted by Michael Zelenka at 8:11 PM