I have a dumbphone. The opposite of a smartphone, I received the phone I currently own in 2009, on the day of my graduation from the University of Notre Dame's ACE Leadership Program. In that sense, it holds a bit of nostalgia. In another sense, I am cheap. In yet another sense, I appreciate the fact that I cannot get email unless I'm on a computer or device with internet connection. It helps to limit, as if I couldn't put my own restraints on it, how accessible I am to the outside world. 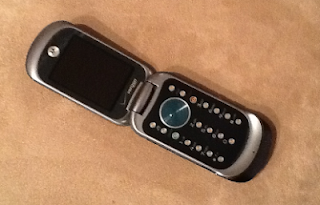 I am somewhat proud of my dumbphone. I've had it for almost 4 years, and so I have grown somewhat attached to it. It still works. It may take me 29 times as long to draft a text than the average person gifted with smartphone capabilities, but it can send and receive text messages. It can take pictures and videos, and so long as I don't exceed my limit and end up paying what seems like over $1.00 per text, I can actually send and receive those, too. My phone, however, has no apps. It's dumb and not only lacks the knowledge to be able to do so, it also lacks the internal plumbing necessary to support this type of pipe flow.

And, since I'm one of the last people to still have a dinosaur that makes phone calls, maybe they'll put a picture of me and my phone in the dictionary; "dumbphone" was recently added to the Oxford's version as a new word, along with "cruft" (badly designed, unnecessarily complicated, or unwanted code or software), "touchless" (relating to or denoting technology that is operated by means of gestures rather than by touching a control or interface), and "tweetable" (suitable for posting on the social media site Twitter).

The genesis of a new word is fascinating. New words are formed all the time. Think of the circle of your closest friends and how you most likely have a set of vocabulary that an outsider would find incomprehensible or at least somewhat strange. Words are combined with others. They are shortened and used as different parts of speech. Words are given new meanings based on an experience, event or episode. The creation of new words is in many cases spontaneous. The process for a word to gain dictionary-worthy recognition, though, is long and involved and depends almost entirely on usage.

Things like magazines, newspapers, internet sites, and even blogs are checked for new words, new meanings, new spellings and / or inflections. Words are compiled by citations (the number of times it is used) and then those words that are used most often, most consistently and over a long period of time are brought into entry form in a dictionary (for more on the way a word enters a dictionary, click here: new words).

So, while I may not get included in the dictionary for the possession of a dumbphone, I could potentially originate or at least contribute to a new word getting entered into this resource. One of the great things about language, though, is that even if a word does not appear in the dictionary, so long as it has some sort of contextual reference or basis in known words, an audience can determine its meaning.

The same is true of "new" words that we encounter that actually are included in a dictionary. We can often decipher meaning through context clues, etymologies, prefixes, suffixes, or even content or genre. Just as skilled writers can manipulate Standard English Grammar to work in their favor, masterful scribes can create new words that a reader can understand with little to no effort.

The new Common Core State Standards will help students to become better language artists and the emphasis on text will challenge students to communicate more effectively through words. It is an exciting shift that will most likely inspire the formation of many new words, and it will undoubtedly encourage students to enhance and improve their abilities to communicate.

My dumbphone wonders when they'll make an app for that.
Posted by Michael Zelenka at 7:31 PM