Do You Hear What I Hear?

Throughout my youth, my mom would always lament society’s urge to celebrate Christmas with no regard for the season of Advent. She would voice frustration over Christmas songs on the radio in November, Christmas trees up before December 1 and down by the 26, endless advertisements, and boundless pressure for the perfect holiday. 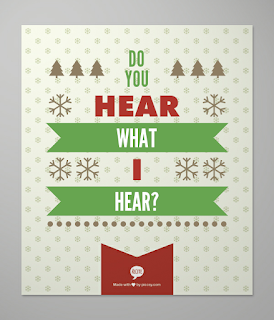 The messages of the world bombard us:

Read this quickly so you can catch the Cyber Monday deals!

Only 24 shopping days until Christmas remain!

In our efforts to live up to these demands, we are consumed by shopping, parties, wrapping, cleaning, baking, mailing, decorating, and more shopping. We find ourselves filled with more debt, stress, exhaustion and stuff than hope, peace, and joy.

We celebrate Christmas without first celebrating Advent. We heed society’s demands and dismiss the call of Jesus, “Come after me!”

In today’s Gospel, on the feast of St. Andrew, the first apostle, we read Matthew’s account of the first summons:

As Jesus was walking by the Sea of Galilee, he saw two brothers, Simon who is called Peter, and his brother Andrew, casting a net into the sea; they were fishermen.
He said to them, “Come after me, and I will make you fishers of men.”

At once they left their nets and followed him.

He walked along from there and saw two other brothers, James, the son of Zebedee, and his brother John. They were in a boat, with their father Zebedee, mending their nets.

He called them, and immediately they left their boat and their father
and followed him (Matthew 4:18-22).

Like the first apostles, may we have the courage this Advent to leave aside the nets of the world that have caught us in the belief that more stuff leads to more joy. May we boldly jump out of the boats headed toward frustration and emptiness and into the waters that lead to Christ.

This Advent let’s prepare our hearts for the Incarnation instead of our homes for the holidays. Let’s spend more time praying and less money on gifts, more time creating memories with loved ones and less energy on the stress of the season.

This Advent let’s fight for the space to hear His call, “Come after me.”

Leave everything behind, jump into the water, and follow Jesus!
Posted by Michael Zelenka at 1:36 PM

The Magic of Why

If your why is strong enough you will figure out how!
–Bill Walsh

I retweeted it and included, "How is powerful. Why is magical."

I first heard this concept as an Athletic Director at Bishop McLaughlin. In interviewing candidates for our head football coach, one prospect stated that his philosophy was based upon giving student-athletes not just the "power of how but also the magic of why." Why do we block with our hips and not our hands? Why do we run sprints at the end of practice? Why do we taper off throughout the course of each week? Why do we study film? The more that he talked about this approach, the more that it resonated with me. There were countless athletic maneuvers that I could perform and even teach to student-athletes, but I clearly understood the difference between getting players to follow my footsteps and having them understand why those footsteps are the correct ones to follow.

Unfortunately and appropriately, this candidate took an internship with the NFL instead of the head coaching position at a brand new Catholic high school. But fortunately, I was left with this message.

10 years later, Bill Walsh's statement reimagines this interplay between how and why for me and extends and refines my understanding of the relationship between these two important educational forces. Bill Walsh seems to start with why and argues that the how flows from this genesis. Furthermore, he iterates that the strength of the why has a direct correlation to the effectiveness of the how. Conviction matters. Faith is paramount. Hope is essential.

So, here's my why: to serve God and others. I'm trying to reorient my how and ensure that it flows from my starting point. For me it means a return to participating in the Celebration of the Eucharist on Friday mornings. It means putting my role as husband and father on higher footing than my ministry as a principal. It means staying up late on Saturday night so that I can uphold the Sabbath. It means stretching my pockets financially and inching closer to true tithing.

I know that it won't mean working less but instead working more purposefully.

As a ad-minister of Catholic education, I see how easily I can fall into the trap of idolizing my ministry. Discovering the root belief behind my profession, though, definitely helps me to put what I do into proper perspective. I am not a slave to my role as principal. Instead, I am a slave to Jesus Christ and I serve others - my school, my teachers, my students, and most importantly my wife and kids - because I serve Him.

There is power in this conviction. There is magic in what the Spirit can do through us when we do it in service of the Gospel.

May you discover why you do what you do and may you experience the power of a how that grows from this root belief.

Unlock His magic.
Posted by Michael Zelenka at 12:08 PM