Hope Will Rise and Hope Does Not Disappoint

Recently I heard the story of a town that, after many years of not having a bell to fill their bell tower, had finally made the appropriate arrangements for one to be installed. The bell, large and heavy, was being transported from where it was created to the town via a river. Much to the dismay of the townspeople, the boat carrying their bell overturned and both the boat and the bell sunk to the bottom of the river.

The best engineers from the town went to work on trying to retrieve the bell from its muddy and murky resting place. Attempt after attempt continued to fail. Despair settled across the land. Perhaps the bell tower, like the hearts of the townsfolk, was to remain empty, hollow, silent.

On the outskirts of the town, on top of a hill, however, a monastery stood. Watching the commotion from afar, one of the monks ventured into the town and offered an idea. Holding a bamboo stick in his hand, he shouted with conviction, "I have the solution to your problem with the bell right here in my hand."

The people attending to the problem scoffed at the preposterousness of the claim. The greatest minds in the land had constructed elaborate contraptions and the bell remained on the river's floor. The monk's idea seemed foolish at best.

Sensing their disbelief, the monk shouted even louder and with even more conviction than before, "Of course, just one bamboo stick won't bring back your bell. But, with a stick from everyone in town, I believe we will reclaim it."

The buoyancy of the bamboo, the monk went on to explain, could bring the bell up to the surface provided that there was enough of the plant. Urging the crowd to collect as much bamboo as possible, the monk went to work on assembling rope that would tie to both the bamboo on one end, and the bell on the other.

Swimmers dove into the water and one by one the pieces of bamboo were affixed to the bell. After a while, the bell began to jostle and bounce, dislodging itself from the muddy bottom. Swimmers continued to take more and more bamboo to the depths of the river. Word spread that the bell had started to move and excitement throughout the town mounted. Swimmers continued to take bamboo to the bell at a frantic pace - diving, tying, swimming toward the surface, again and again and again.

Slowly, the bell began to rise, inching up, out of the mud. Higher and higher it began to float. Rising with a cloud of bamboo and rope leading its ascent, the bell finally emerged out of the surface of the water to an eruption of cheers from the crowd of people. The work to pull it to shore was sure and swift. Maneuvering the metal on land, while no small feat, was orchestrated much more easily than it had been aquatically. 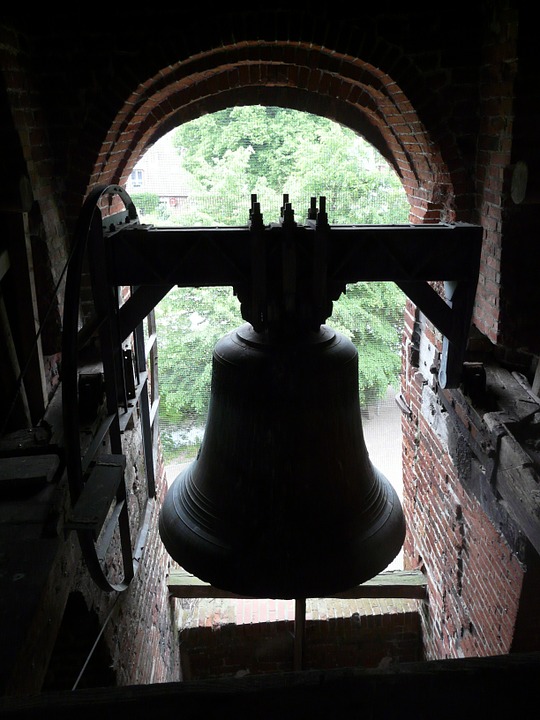 When the bell finally made it into the tower and chimed for the first time, its notes sang out a song of triumph over despair. It echoed this tale of community, solidarity and the success that can be borne of a unified, collective effort. As the bell would continue to ring, its voice would continue to serve as a reminder of this message: when you work together, when you work hard, and when you work toward a mission beyond yourself hope will rise.

St. Paul writes in his letter to the Romans a similar message of the power of hard work and hope:


Not only that, but we even boast of our afflictions, knowing that affliction produces endurance, and endurance proven character, and proven character, hope and hope does not disappoint, because the love of God has been poured out into our hearts through the Holy Spirit that has been given to us.

Boast of your afflictions. The world will be rough and cruel. Embrace these hardships with the conviction that with Jesus Christ anything is possible. Jesus tells us, "In the world you will have trouble, but take courage, I have conquered the world." Don't run to God to tell Him about how big your problems are, run to your problems and tell them how big your God is. Stand up to your giants and declare to them, "So what, now what?!"

Know that when you tackle these afflictions that it produce endurance, resilience, grit. The most consistent characteristic of successful people in any area of life is their capacity to recover quickly from difficulty, conflict or affliction. Allow your afflictions to galvanize your spirit. Allow your hardships to teach you that your spirit is something more powerful than your flesh and bones. The Spirit of the Lord is upon you. You can do hard things.

As you do this, as you approach problems head on, as you willingly accept the challenges life will throw at you and as you continue to get knocked down and back up again, you develop a reputation, a character, a name - your name. You start to play that part that is only yours to play in this drama called life. You take your place in history, in HIStory.

Embrace your afflictions. Develop endurance. Galvanize your character. Become who you were created to be And HOPE WILL RISE.

Incarnation Catholic School Class of 2016, go out and gather a piece of bamboo. Dive into the waters of life and join your efforts to a cause bigger than yourself. Work hard. Work with others and be an agent of hope to those in need. Go down into the depths and darkness of this world and bring back someone's bell. Bring back their reason to believe that there is good in this world and that it's worth fighting for. Bring back their hope. Rise up, ICS Class of 2016, for because of you - for what you have already done and for what God has in store for you to do, your life will ring out:

HOPE WILL RISE!
Posted by Michael Zelenka at 9:34 AM