St. Benedict's Preparatory, in Newark, NJ, uses the following line as a motto for its community:

It is ingrained in the hearts and minds of students. It is emblazoned on walls. It is a rallying cry, a moral compass and a constant reminder that we are in the image and likeness of a Triune God; therefore, we are made for each other.

Prior to last spring, however, the line lacked two words: "or sister." Up until the Spring of 2020, St. Benedict's Prep functioned as an all-boys' high school. Whereas it did admit girls into its lower school division a few years ago, its high school comprised only boys. 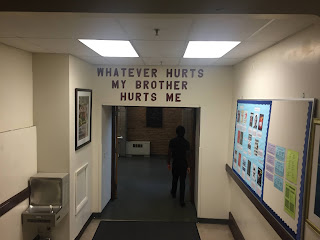 However, the pandemic affected the enrollment of an nearby all-girls' school, Benedictine Academy, so severely that it was forced to close at the end of the 2019-20 school year. Benedictine Academy students approached Fr. Edwin Leahy, the headmaster at St. Benedict's Prep, advocating for a chance to maintain their high school formation in a Benedictine environment.

Ultimately, and without a solid plan forward for the start of the 2020-21 school year about either the integration of girls or precautions due to the pandemic, Fr. Edwin and the St. Benedict's Prep community welcomed girls into its high school division for the first time:

What this will look like? I have no idea right now, That’s the fun of it. You can go into a battle with a battle plan — but no battle plan ever works out according to the plan that you set. You have to adjust and move and change things as you go. We’re going to try our best to provide this opportunity. (https://www.roi-nj.com/2020/05/14/education/st-benedicts-prep-in-newark-to-admit-girls-starting-in-fall/)

This is not a statement against single sex education. Likewise, I am not necessarily promoting a co-ed approach. Both have merit; both also present challenges.

Instead, this is a statement highlighting our interconnectedness with every other person.

Educating our students so that they come to believe and understand this is one of the many goals of a Catholic education. In a 2017 document written by the Congregation for Catholic Education, Educating to Fraternal Humanism: Building a "civilization of love" 50 years after Populorum progressio, educating to fraternal humanism is described in this way:

'Humanizing education' means putting the person at the centre of education, in a framework of relationships that make up a living community, which is interdependent and bound to a common destiny. (Congregation for Catholic Education, 2017, #8)

This approach necessitates an embrace of both/and. We BOTH put the person in the center of education as an individual, AND immerse her/him in a web of relationships. We BOTH promote the development of an individual's vocation AND we posit that within the context of community. In order to humanize education we need to "make it a process in which each person can develop his or her own deep-rooted attitudes and vocation, and thus contribute to his or her vocation within the community" (Congregation for Catholic Education, 2017, #8).

This both/and method means that we BOTH hold fast to the tenants of our Catholic faith AND promote a culture of dialogue through the following grammar: build bridges, find common ground, ensure freedom, equality, peace, fairness, respect, and democracy. We allow an "encounter between differences with the primary objective of building a better world" (Congregation for Catholic Education, 2017, #15).

Catholic schools BOTH build up the Kingdom of God in heaven AND establish it here on earth. We BOTH embrace development as a path toward peace AND recognize that humans are not redeemed by science but rather by love. We globalize hope through the synthesis of faith with both culture and life. "It is up to education, then, to offer this hope to the peoples of the world, as a message conveyed by reason and active life" (Congregation for Catholic Education, 2017, #17).

Catholic schools are BOTH for AND with, extending and erasing margins by allowing "every citizen to feel actively involved in building fraternal humanism" (Congregation for Catholic Education, 2017, #20). Catholic schools BOTH look both forward AND backwards. We assess the quality of our work on the "sustainability with respect to the needs of future generations" (Congregation for Catholic Education, 2017, #22). With a vision for the future, we also have firm roots in our history, tradition and past. We are not perfect; neither were our ancestors. Yet - AND - we stand on the shoulders of giants.

Finally, we recognize that we are BOTH stronger as individuals AND as a community when we work tougher in cooperation networks at every level. "(C)ommunion and mission are profoundly connected with each other, they interpenetrate and mutually imply each other, to the point that communion represents both the source and the fruit of mission: communion gives rise to mission and mission is accomplished in communion” (Congregation for Catholic Education, 2007, #11).

(BOTH) Communion gives rise to mission AND mission is accomplished in communion.

We are fraternal, meaning together in the womb.

We are better together.

Congregation for Catholic Education. (2007). Educating Together in Catholic Schools: A shared mission between consecrated persons and the lay faithful. http://www.vatican.va/roman_curia/congregations/ccatheduc/documents/rc_con_ccatheduc_doc_20070908_educare-insieme_en.html
Congregation for Catholic Education. (2017). Educating to Fraternal Humanism: Building a
"civilization of love" 50 years after Populorum progressio:         http://www.vatican.va/roman_curia/congregations/ccatheduc/documents/rc_con_ccatheduc_doc_20170416_educare-umanesimo-solidale_en.html
Posted by Michael Zelenka at 1:42 PM

Dream With Your Eyes Wide Open

One of my family's favorite movies is The Greatest Showman. My kids know the lyrics to the songs and they love mimicking the dance moves. Couple this entertainment with the stories of inclusion, reconciliation, purpose, love, and redemption, and this fictional retelling of the inception of P.T. Barnum's circus has a special place in the Zelenka household.

Hugh Jackman depicts Barnum as a visionary, seeing a world in his mind and heart that he dreams of bringing into the world. Barnum's vision drives the action of the movie and we see it fuel the circus's establishment, rise, demise, and eventual re-imagination.

Vision plays a key role in the movie's soundtrack. We hear Barnum sing the following lines as both a child and adult in "A Million Dreams":

As he takes steps to bring this vision to life, Barnum sings these words in "Come Alive":

I believe these two song lyrics, when considered jointly, offer good insights into what vision is and how it can impact our Catholic schools. First, the dreams of our hearts and minds, those inspirations that fill us with energy and life, supply our vision with both wings and wind. Second, as we take steps to bring this vision to life and start to fly, we begin to see the world from another perspective. In many ways, once our vision has taken off, we can't and don't want to go back to seeing the world as we did before.

Being a graduate of Remick, a former executive coach, and a current member of its faculty, I believe that the Mary Ann Remick Leadership Program awakens within its members a vision for Catholic education that we cannot and do not want to unsee.

From a programmatic standpoint, I believe that the following line tucked in between two headings on page seven of the Program's Handbook reveals its vision:

The goal of the Mary Ann Remick Leadership Program is to provide a Catholic education of the highest quality to as many students as possible.

Granted, the sentence uses the word "goal" instead of "vision." Yet, when we consider what the world will look like when we accomplish our shared purpose to prepare transformational Catholic school leaders who make God known, loved, and served, I believe we can envision a world where Catholic schools are sustained, strengthened, and transformed.

As a result, Catholic schools will offer an education of the highest quality. With a focus on evangelization, academic excellence, and integral and holistic formation, Catholic schools will foster the "gradual development of every capability of every student" (Congregation for Catholic Education, 1988, #99) and in doing so bring people to fullness of life in Jesus Christ.

Furthermore, Remick leaders will construct Catholic schools that embrace both charity and justice, forming "men and women who will be ready to take their place in society, preparing them in such a way that they will make the kind of social commitment which will enable them to work for the improvement of social structures, making these structures more conformed to the principles of the Gospel" (Sacred Congregation for Catholic Education, 1982, #19).

Put another way, Catholic schools led by Remick Leaders will establish the Kingdom of God on earth as it is in heaven.

This is the vision of a Remick Leader.

You can't unsee it, can you?

What's more, is that you don't want to, right?

Together, as we dream with our eyes wide open, let us make this vision - our vision - come alive!

Congregation for Catholic Education. (1988, April 7). The Religious Dimension of Education in a Catholic School: Guidelines for Reflection and Renewal. Retrieved from:  https://bit.ly/2NKgCyL

Posted by Michael Zelenka at 2:13 PM