I hate this shirt. 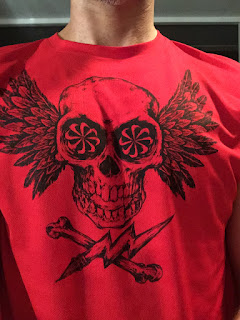 I've had it for about 5 years. What's more is that I even actually wear it. Made of moisture-wicking material, I don it for workouts when I'm less than excited about working out. I hate the shirt more than I'll hate the workout, no matter what the workout will be. In fact, I get so upset about putting on the shirt that it typically inspires a great burn.

As such, this shirt has taken on new meaning. I still despise it; however, it has become a symbol of the grit needed to remain disciplined to a program of exercise. What was once something despicable, this shirt has turned into something life-giving. When I'm in need of a pick-me-up to workout (or more appropriately a kick-in-the-butt) I opt for this shirt.

It is a sign and symbol of something very different now than when I first received it. I wouldn't wear it out (I workout in my lanai), but I appreciate the lift that it provides to my time of exercise.

This shirt has undergone a transformation similar to the extreme makeover received by the cross used for crucifixions. As Bishop Robert Barron states in the video below, the cross / crucifixion was "state sponsored terrorism" and was "meant to terrify people and it did terrify people in the ancient world." Crucifixion was used as a sign and symbol to discourage any type of behavior that crossed those who employed it as a punishment.

Crucifixions were public affairs. The crucified were exposed as public deterrents to rebellion, or any behavior in opposition to the state. This is precisely why the disciples are seen running from the cross and hiding in obscurity immediately following his Passion. Crucifixion was the worst form of death; it was to be avoided at all costs.

What was once a symbol of terror is now held up as one of hope.

What was once a sign of death is now proclaimed as the only path to life.

St. Paul throughout his letters and teachings claims that he preaches one thing: Christ crucified.

To the early Church, this message would have been hard to accept. How could this instrument of death be so boldly mocked?

In the words of St. John Chrysostom:

Quite simply, because it's true.

While the endorphin-making atmosphere that my shirt initiates will most likely fade away over time, the power of the cross to remind believers of hope, peace, joy and love has endured for over 2000 years.

If it was a lie, if Christ didn't conquer sin and death by submitting to it, would the apostles have come out of the upper room? Would the early Church have actually spread if the Resurrection was nothing more than a clever conspiracy? Wouldn't a cult have just died with its zealously crazy core group?

Peter, John and the apostles didn't just encounter an empty tomb; they encountered the risen Christ. They saw Him. They touched His wounds. They knew that He had risen and lived their lives in such a transformative way from that day on that they were able to establish His one, holy, Catholic and apostolic Church.

Let us lift high His holy Cross today and every day.

Hope Will Rise!
Posted by Michael Zelenka at 10:04 PM