The Light Is On For Me

One of the things that my dad always did for me once I was old enough to start driving and had a curfew to which I had to abide by myself was stay up for me. Whether the curfew was 11:00 or 12:00 or even later, my dad would always leave the outside light on for me, an inside light or two as well and he would always be sitting on the couch, most likely sound asleep and snoring loudly enough to wake the entire house upon my return. Sometimes he would actually be awake. Sometimes he would startle as I walked in the door and feign wakefulness. Many times he would stay up with me until I went to bed. He and I shared snacks, conversations, and late night television. His watchdog-esque approach did not end as I entered college, moved to Florida, got married or even had children.

My dad always left a light on for me. He always stayed up (or at least out of bed) to greet me upon my return. He always let me know, more through actions than words, that he loved me.

My dad was always there for me.

Today the Diocese of St. Petersburg offered its annual "The Light Is On For You" night, where every church in the diocese leaves its doors open from 5:00 - 7:00 p.m. and offers the Sacrament of Reconciliation to anyone desiring to celebrate it. Incarnation Catholic Church had a wonderful turnout. At various points throughout the night, there were as many as 20 people waiting to receive this Sacrament. Imagine if this was the norm throughout the diocese and its over 50 churches - this even potentially thousands of people felt an even deeper love than that conveyed by my father to me over the course of my young adult life. Our Heavenly Father was waiting for us this evening, hoping that His sons and daughters would return safely to Him. It is a beautiful image. It is a beautiful Sacrament.

Satan was dealt a beautiful blow this evening.

Isn't it great to play for a Winner? 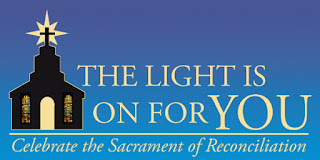 As Catholic educators, it is important that we embrace this concept of 'leaving the light on' for our students. In the same way that my dad would leave it on for me and in the same way that our diocese left it on for Catholics across our area to celebrate Reconciliation, we need to be present to students in such a way that they know of our love, concern and support for and of them. We need to let them know that we will always have our lights on for them and that we truly care about their struggles, fears, anxieties and problems.

Students in younger grades who come to us in what seems like a tattling fashion are looking for us to listen to them and then do something on their behalf (even if it is just to talk with the accused). They want to know that their voice was heard. They want to see that our light was on for them to approach us with their issue.

Older students want adults to do what they say they will do. As they come to a greater sense of self and start to identify their identities, they are juxtaposing what they know of the world with both what they think it should be like as well as who they think they should become. They want adults to leave their lights on by being consistent, by being loyal, by being true to their word and by being noble in their actions.

The pain of my father's passing is still raw; it is a huge salve to know that my Father's light, just like my father's light always was, is always on for me. Every day. Any time. Always.

The light is on for me, for you, and it should be for our students.